Germany is among the most visited countries in Europe. Tucked in central and part of western Europe, the country records an impressive number of visitors each year. Good climate, security, several attractions, and a vibrant economy are some of the reasons why Germany is a preferred tourist destination.

If you have come to the decision of Germany being your next decision you need to know what awaits you. This includes entry procedures, places to visit and what to do while around in addition to costs. Let us have a look at some of these essentials.

What to See in Berlin

There are several attractions out to your satisfaction in this country. A rich history, amazing terrain, and technological advancements translate to plenty of places to visit in Germany.

The following are the major attractions in Berlin, Germany.

#1 The Brandenburg Gate In Berlin

The capital city is filled with iconic monuments that are a reflection of Germany’s political past and current diversity. A notable monument in Berlin that we highly recommend visiting is the Brandenburg gate. The monument is of historical and political significance and has been in existence since its erection on order of King Frederick William II of Prussia in the 18th century.

You’ll often run into events and gatherings that end at the Brandenburg Gate. We were able to walk along the running path of a marathon while we visited Berlin in May 2019. 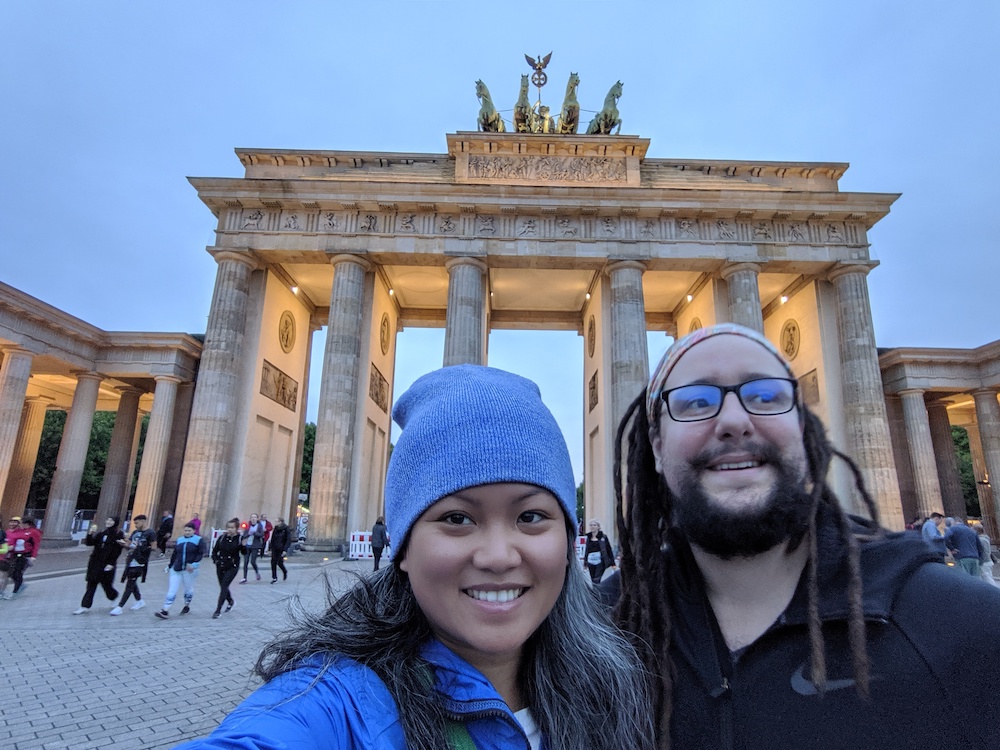 Visit the remnants of the Berlin Wall that was once a dividing point between eastern and western Germany after a political ideology standoff. The wall got demolished and marked the end of the Cold War. The wall now functions as a gallery with some sections featuring graffiti portraying different ideologies. 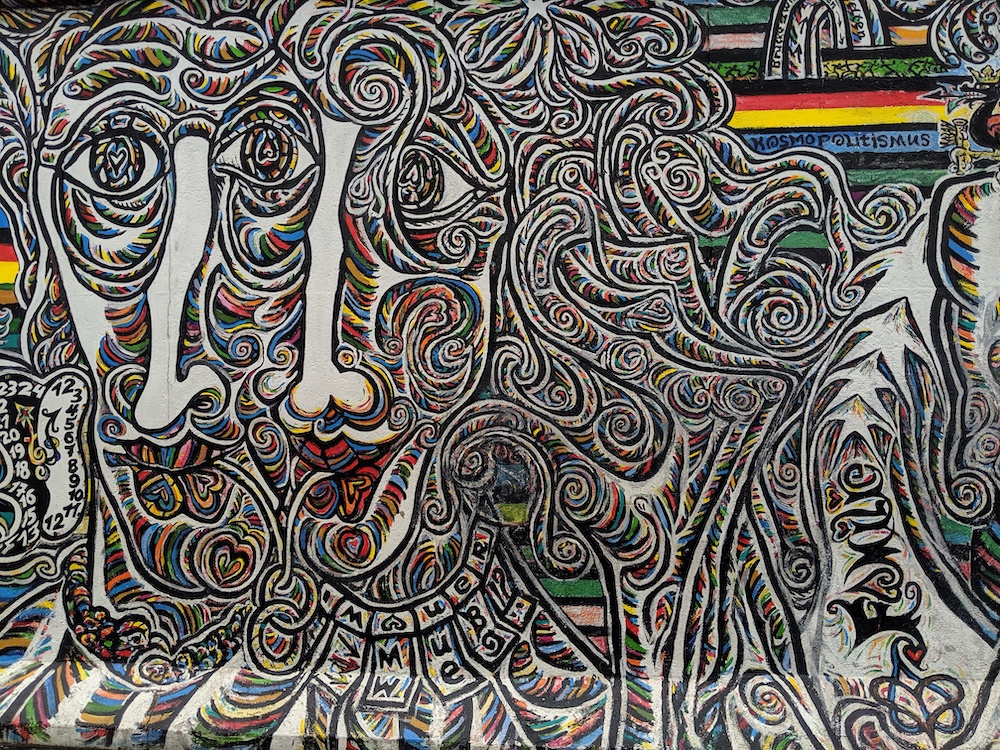 Checkpoint Charlie was the name given by the Western Allies to the best known Berlin Wall crossing point between East Berlin and West Berlin during the Cold War. It was first set up in August 1961 and only foreigners were allowed to cross.

November 9, 1989 signaled the end of a divided Berlin. Checkpoint Charlie remained in operation until seven months later, when the guardhouse was removed during a ceremony attended by French, British, American, German and Soviet dignitaries. It is now displayed at the Allied Museum in Berlin and a replica sits in its place for tourists.

You have the option taking a photo with the soldier actors and even get your passport stamped for only 3 Euros. 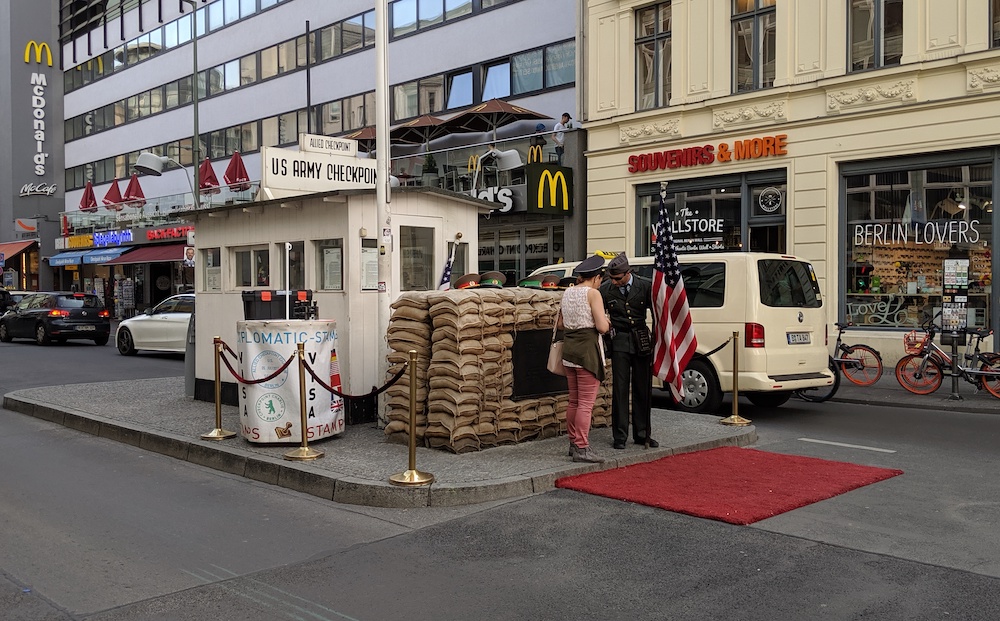 The Fernsehturm tower, also known more commonly as the TV tower. Deutsche Telekom owns the tower and broadcasts over 60 different radio and television programs via the tower’s antenna. The tower was erected in 1969 in Alexanderplatz, a popular shopping and tourist area.

The tower is the tallest building in Germany at 368 meters and only 400 people can be in the sphere at any time. The tower is practically visible from every point in the city. 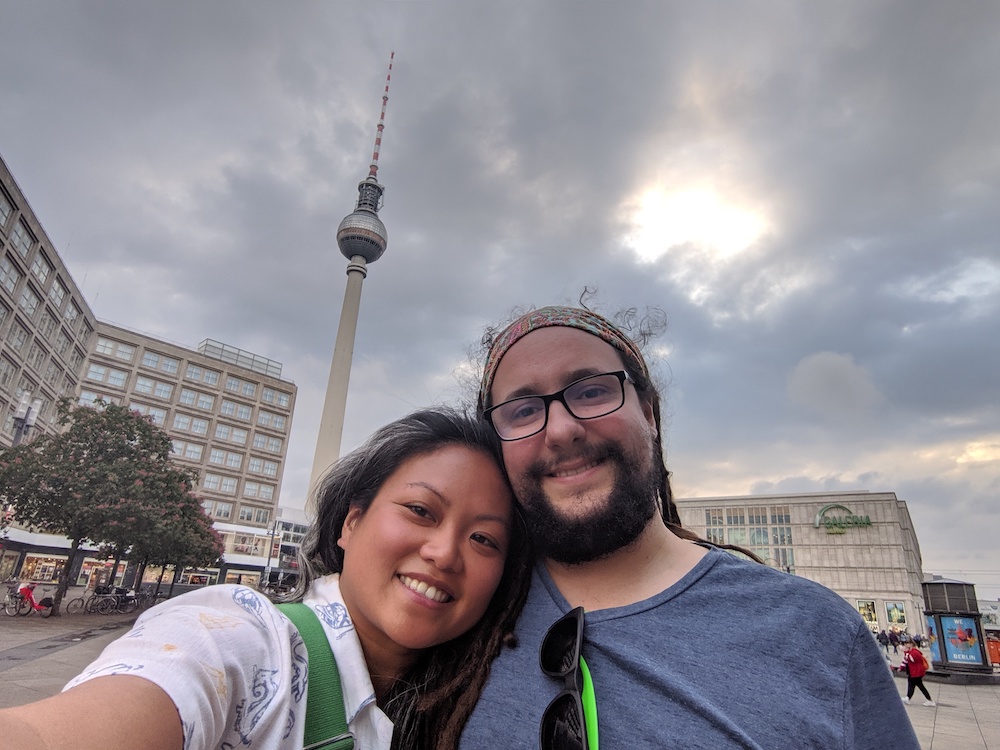 If you’re into dancing and partying all weekend long, Berlin is the place to be! We were able to get into the notorious Berghain club known for techno and industrial music and the “gay scene.” I really enjoyed the chill atmosphere at Sisyphos, which is more like a mini Burning Man festival.

Just a heads up, you will be asked to cover your phone cameras because no photos are allowed! The clubs are exclusive but super fun!

Berlin is filled with delicious food options. On the street, you’ll find the popular currywurst dish. We highly recommend trying everything because it is inexpensive and delicious!

Other restaurants that we really enjoyed included:

Pro Tip: If you’re planning on dining out, it’s very common to make a reservation via phone or online. 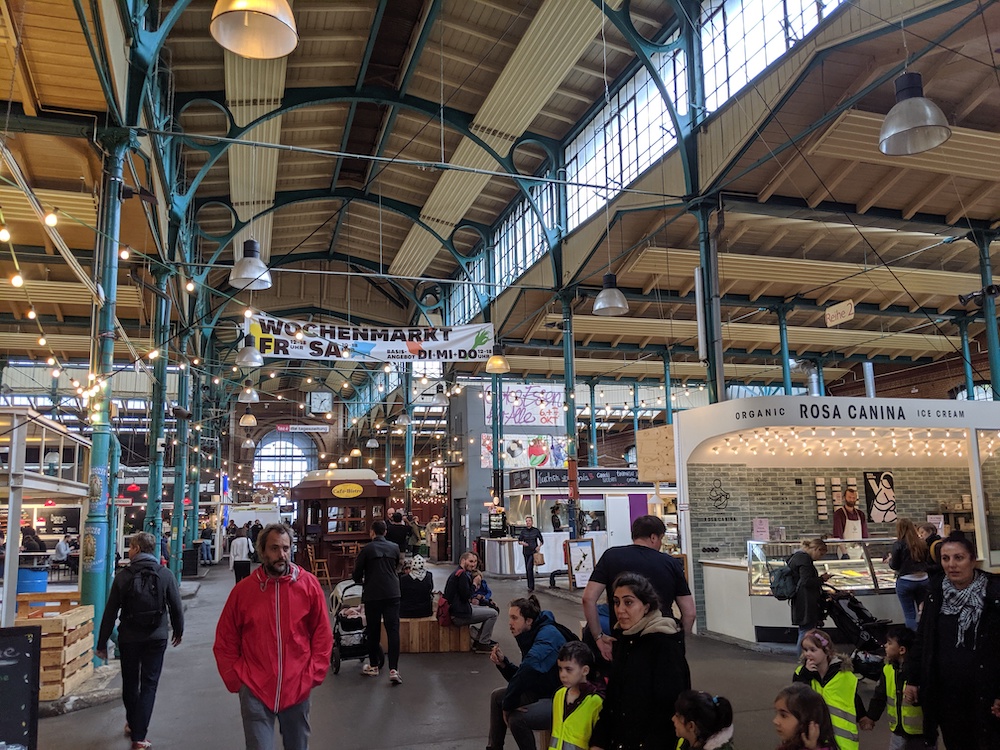 Inside the Markthalle Neun food court

What Do I Need?

Documents: You must have a valid passport and a tourist visa to enter Germany.

Currency: Berlin is mostly a cash city and uses Euros. Make sure you have an ATM card to withdraw cash. We recommend 60 euros per day. You’ll also see many Euronet ATMs. AVOID THESE at all costs! Find a legitimate bank and withdraw from there instead.

Germany is relatively inexpensive to travel around. We found food and transportation costs to be fair compared to surrounding countries like France or Switzerland.

We traveled to Germany by plane from Switzerland to Tegel Airport (TXL), but you can also book a flight into Berlin Schönefeld Airport or Berlin Brandenburg International Airport.

You also have the option of traveling to Germany by Flix bus. It’s inexpensive and comes with wifi that works intermittently.

Once in Berlin, we highly recommend getting around by bus or metro. Download the BVG app and buy and use your tickets to go from site to site.

Apart from the above attractions being some of the most popular in Berlin, Germany, there are also several heritage sites and monument which show off Germanys’ gothic architecture. There are several museums, religious building and castles around that you can also view throughout the country.

Sign-up for our monthly newsletter for updates and more. We promise we won't spam you! Feel free to unsubscribe anytime.

If you're a brand and want to submit a product for us to review, please use this form to get in touch.

This site uses affiliate links. Clicking on or purchasing via an affiliate link may result in commissions for us which help keep the content flowing and lights on at Schimiggy Reviews. You may read more about this in our privacy policy.

Join our community of over 160,000 monthly readers!